Shoulder Injuries in the Throwing Athlete 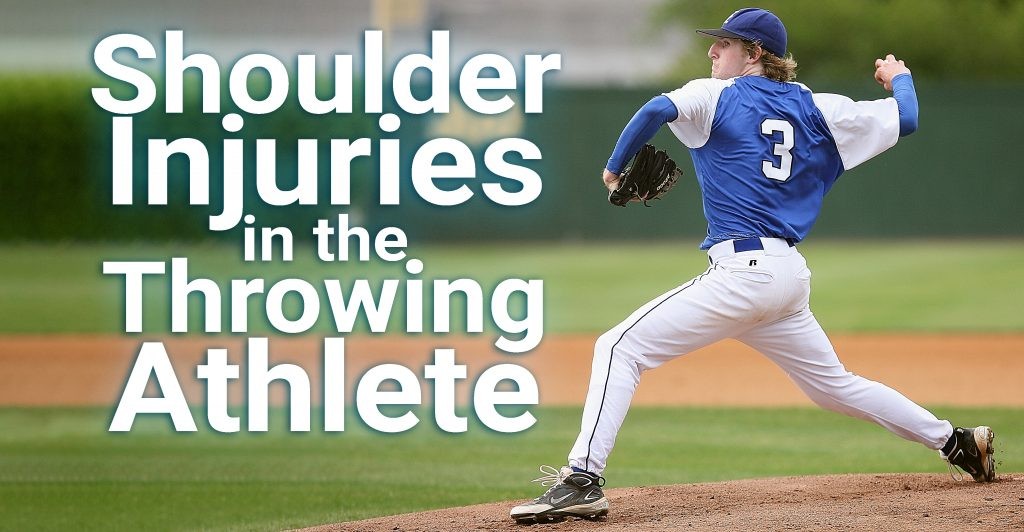 One of the biggest problems that inhibits baseball players from throwing every day is anterior shoulder pain, or pain that is in the front of the shoulder. This pain frequently gets pushed off as it isn’t considered to be “bad enough” to see a doctor. However, delaying medical attention doesn’t halt the progression of this injury. Let's review some of the symptoms of anterior shoulder pain and why baseball players experience this shoulder injury so often.

If you follow the bicep muscle up to the top of the shoulder, the pain is usually located right next to the armpit. This type of pain will typically occur because of altered or poor throwing mechanics, overthrowing, or not warming up properly.

This is most frequently known as bicep tendonitis and is a commonly misdiagnosed injury as there are almost a dozen soft tissue structures in the same area. They all present with the same kind of symptoms. The pain usually starts out sharp and well localized while the player starts to throw, and then gets dull and achy later that night or the next day. This injury is often prescribed ice, rest, and ibuprofen for 4-8 weeks. The most important part of this injury, the why, is never addressed.


The Why – Case Study

Sam is a 16-year-old baseball player that is a pitcher and outfielder. He came into the office in September after a busy summer full of travel baseball. He had been feeling “uncomfortable” while warming up for the last few months. Once he got warm, the pain and discomfort went away, but it bothered him enough to tell his mom and dad. His pain felt like a pinching sensation but was only a 4/10 on the pain scale (10 being the worst pain). His parents gave him ibuprofen four times per week and had him ice after every game. The injury kept progressing and they were reluctant to go see a medical professional because he didn’t want to stop playing over the summer. This type of injury did not seem major, but it felt like Sam was not seeing any progress throughout the summer.

The throwing motion is full of intricacies and specific feelings for the player. Due to my background in baseball, I am very aware of these sensations and why certain pain happens at certain motions of the mechanics. After an exam and functional movement screening, I was able to find “the why”. Sam felt the tightness when his arm started going forward during the throwing motion. After various tests, I found that the problem is coming from two of the four inactive rotator cuff muscles of which can be fixed in office.

The treatment consisted of two visits per week for a month. During these treatments, I used many of the modalities that we offer including chiropractic adjustment, Russian Stimulation, therapeutic ultrasound, active release, and kineseo tape. The goal was to restore range of motion in the shoulder and spine while normalizing the firing patterns. The treatments took about 45 minutes in the office. Sam also received some throwing cues, stretches, and exercises that he can take back to the baseball field of which will reduce the probability of this injury happening again. The next season, Sam never missed a start due to injury. He resumed throwing and heavy long toss protocols that allowed him to increase his velocity over the course of the season.

After four weeks of treatment and monitoring, Sam was back to throwing pain-free at full effort. The most important part of his treatment is that Sam has now allowed his shoulder to throw properly for the first time in months or even years, so he is unlocking velocity that he never knew he had. He attributes this to the treatment he received at Strack Chiropractic Wellness Center.

Do you know a baseball player who has pain in the front of his shoulder or his elbow? Let him know that he needs to have an evaluation at Stack Chiropractic Wellness Center to make sure that the injury can be fixed without rest and ice. Conservative care and monitoring are the best way to treat throwing injuries.

Do you need some stretches for you or your player's shoulder? Check out these shoulder stretches from Eric Cressey.

More posts from author
Monday, 02 August 2021 How to Minimize Work-Related Back Pain
Thursday, 08 July 2021 How to Prevent Football Injuries
Friday, 28 May 2021 How Cupping Can Help You Overcome Pain and Injury